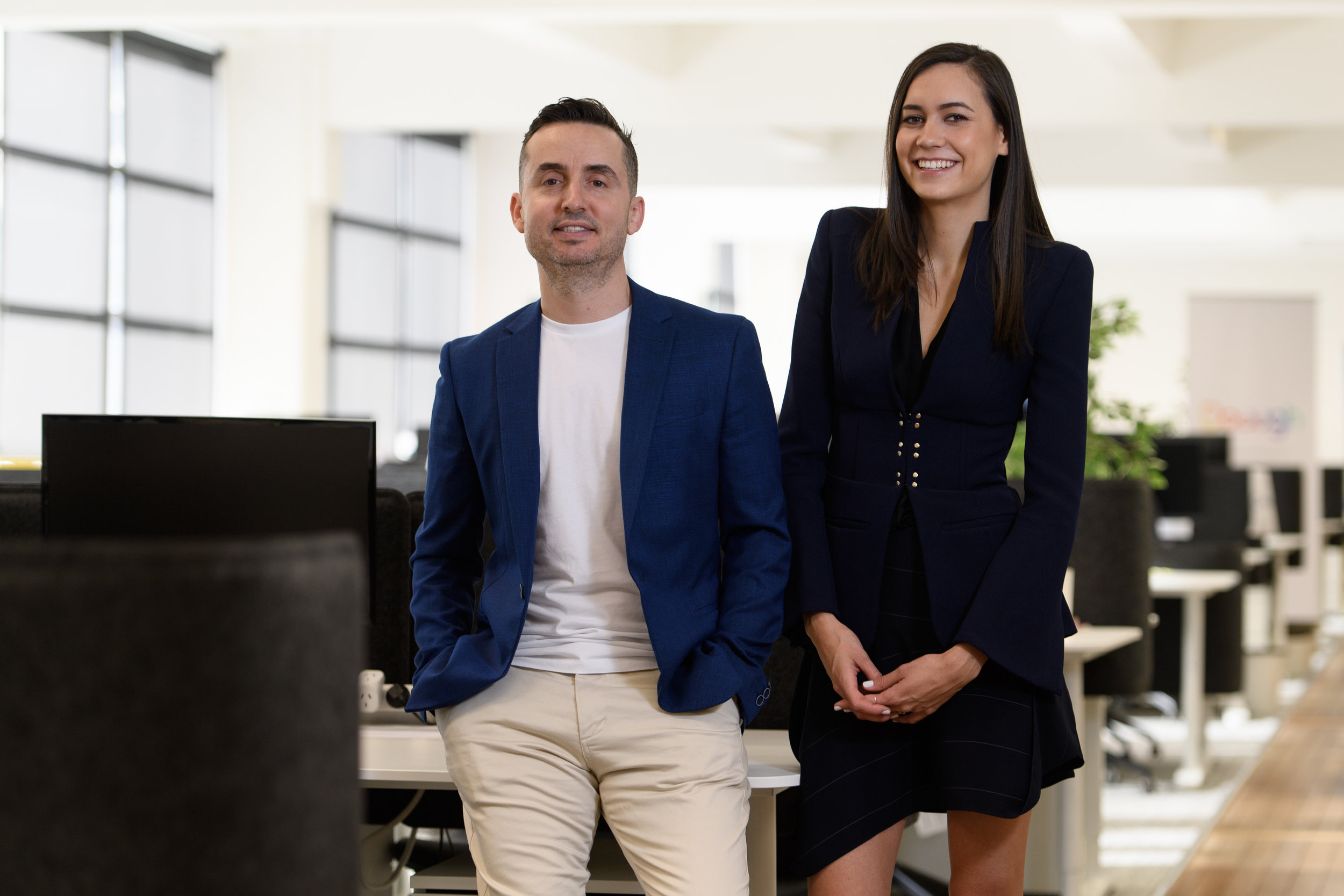 The rise of the ‘on-demand’ economy has rewritten the rules of conventional marketplaces, changing our everyday, from the way we commute, to entertainment and dining. Even the act of dressing is up for disruption, thanks to the ingenuity of Costa Koulis and Kirsten Kore – the creators behind Designerex, the world’s leading peer-to-peer designer dress sharing platform.

Like Costa and Kirsten, Designerex was born and brought up in Australia, where they first founded and executed the concept. The couple were then selected to join a startup accelerator program in San Francisco to expand Designerex to the U.S., leading them to eventually establish their headquarters in New York.

Their innovative idea sprung from their own personal experience, has now turned into an exciting business venture. Costa and Kirsten share the good, challenging and unexpected sides of their adventure in the Big Apple.

How long have you been in New York? What made you move to the city?

C: Designerex has been based in New York since December 2018 and I have been back and forth between New York and Sydney since early 2018. The first time I visited New York was on business for Designerex and I guess I never looked back.

In September 2018, Designerex was selected as part of Austrade’s Landing Pad program in San Francisco so we also spent a few months there.

We selected New York as our HQ, as it is the fashion capital of the world and also an excellent place to do business, given how Manhattan possesses an energy that’s almost larger than life and very fast-paced for business.

K: I first visited New York in April 2018 and since then I have been 3 times for months at a time. I can’t stay away. I think we were always destined for New York – our first Designerex Home Page featured the New York City skyline, with no intention at the time of visiting or basing ourselves out of the city.

How did the clothes sharing concept come about?

K: The concept literally came about from my own experiences of needing a dress for an event, finding a beautiful expensive dress, but not being able to justify the purchase. How could I justify spending $1000 on a dress knowing I would only wear it once? I went searching for a solution and found a few girls renting out their dresses on Facebook. That’s really when my partner Costa and I realised there is an opportunity here to open up the wardrobes of millions of women and provide them with a secure dress renting platform.

What was the biggest challenge?

We ended up selecting the framework Ruby on Rails because other globally-scaled startups such as Airbnb had been built with Ruby. It can scale in line with our global expansion vision. For programming, we ended up outsourcing to a specialised team in South Asia who we knew could service Australia at that time and now the USA with our expansion.

K: The biggest challenge being overseas and away from home is getting back into a routine and setting up your base, getting back into your networks and the whole new rhythm of the New York startup hustle life!

What have been some unexpected outcomes?

C: The positive response by the U.S. market was overwhelmingly unexpected, as we ended up launching with 1,600 dress listings in the U.S., compared to having 200 dresses when we first launched in Australia a few years back. It proved to us that the U.S. was indeed the next logical international market for Designerex, following our continued growth in Australia. Designerex is the world’s largest peer-to-peer designer dress sharing platform, with over 15,000 listings globally.

K: After being selected by Austrade for a 90-day residency in San Francisco in September last year, we were thrilled and surprised by the incredible connections we made and were introduced to. That ended up having a huge impact on the way we proceeded forward with our preparation for launch into the U.S. market. From investors, lawyers, accountants and successful local and Aussie entrepreneurs, it was overwhelming how supportive the startup and investor community is, specifically in San Francisco and New York.

What’s the most important lesson you’ve learnt expanding Designerex into the U.S.?

C + K : About 6 months prior to embarking on our expansion into the U.S., we made a research trip to evaluate the opportunity, the market, the various cities and most importantly U.S. consumer behavior. By far, the biggest lesson has been how valuable gaining an insight to the consumer, their habits, their journey, prior to expanding. Even though Designerex had already been proven highly successful in Australia, we have never underestimated the power of researching a new market. For example, the difference in consumer behaviours between Los Angeles and New York. So the value of research has been a big lesson for us, and we continue to be very passionate about expanding on our understanding of our customer, wherever they may be located around the world, every day.

Is Designerex looking to build a designer clothes lending platform for men in the future?

C + K: We get asked this question more often than not! To be honest, the men I know are not that concerned with wearing the same thing over and over, so for now we’ll focus on the women. That said, the men’s market is changing rapidly and who knows what would happen in the future, but it’s the female consumer that is benefiting from our platform for now.

What surprised you most about NYC?

C: From a business perspective, I absolutely can’t get enough of the fast pace. It’s exactly the pace I enjoy working at. From a personal perspective, I love New York (I don’t have the T-Shirt yet – but maybe I should consider). It genuinely is a city that you could never be bored in 24 hours a day. What surprised me the most is how geographically small Manhattan is – given how big NYC is in stature – and ultimately that is what makes it the unique place it is.

K: I was surprised how much of a great place it is to do business. You have the creme de la creme of networking opportunities and after all, if you make it in New York, you can make it anywhere, right?

What things that have been the hardest to navigate in New York?

C: By far, the hardest thing to navigate from a personal perspective is the excruciating cold weather in winter. Earlier this year we experienced the polar vortex in NYC with temperatures plummeting to minus 15 degrees celsius. The problem when you are Australian, is you may prepare for the cold with the big stuff like jackets or coats, but you don’t think of the attention to detail like ear muffs and thermals. It’s the gaps that get you.

The biggest thing to navigate from a business perspective is the tax system, not just in New York but generally in the USA. There are over 14,000 sales taxes nationally so you definitely need to be on to it .

K: Understanding how business is done in the US and specifically in New York is an art that you do need to invest in to understand well and ensure you’re adapting your business accordingly.

C: The biggest thing I miss about Australia when I am in New York, (apart from friends, family and the weather of course!) are the council bins which you see everywhere in Australia, instead of the NY system of trash bags on footpaths. I also miss the ability to be readily understood with an Australian accent, but you just get used to it after a while – New York’s captivating vibe more than makes up for it.

K: When I’m in New York I absolutely love it, it is like no other city in the world and the opportunities are just endless. Obviously Australia is always home, and the lifestyle it offers is second to none, which is what I miss most.