Dr Peter Farrell is Founder & Executive Chairman of ResMed, Inc. which has a dual listing on the NYSE and the ASX (RMD). ResMed celebrates its 25th anniversary in 2014. Revenues in fiscal 2013 (June 30) were $1.51 billion and net income was $308M; the market capitalisation is $7 billion. The primary focus of ResMed is sleep disordered breathing and respiratory care.

Peter graduated from the University of Sydney with honors in chemical engineering and was awarded a teaching fellowship to MIT where he completed an SM in chemical engineering and then worked at MIT as an Industrial Liaison Officer. He subsequently got a scholarship to complete his PhD in biomedical engineering at the University of Washington, Seattle where he served on the faculty as an Assistant Professor until recruited back to UNSW where he was awarded a DSc and later became Foundation Director of the Graduate School for Biomedical Engineering; he remains a Visiting Professor at UNSW.

He joined Baxter Healthcare as a VP to set up their R&D in Japan which he ran for three years and then worked for Baxter for two more years before starting ResMed as an MBO from Baxter in 1989. Peter is a Fellow of several professional societies and has been both Australian (2001) and US Entrepreneur of the Year for Health Sciences (2005); he serves on visiting committees at MIT and Harvard and was recently admitted to the US National Academy of Engineering. 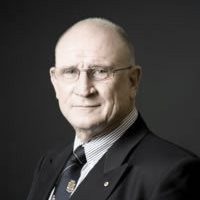