Andrew Harper has been working with refugees since the 1990s when he worked in Turkey during the first gulf war for UNHCR. Famously he was UNHCR Country Representative in Jordan and responsible for more than half a million Syrian refugees who have fled the war in their country. Now he heads the UNHCR Innovation team in Geneva.

As Representative of the UN High Commissioner for Refugees to the Hashemite Kingdom of Jordan for almost four years, Andrew worked in collaboration with the Government of Jordan to lead and coordinate the international response to the Syrian Crisis in Jordan. Some of the main achievements of this partnership was the establishment of the Zaatari and Azraq refugee camps and ensuring that some 635,000 registered Syrian refugees who fled to the safety of Jordan were provided with assistance and protection. Prior to coming to Jordan, Andrew was Head of Desk for UNHCR Headquarters in Geneva, covering the Iraq Situation for six years as well as being the Emergency Focal Point for the MENA region for the Libyan Crisis in 2011. He served with the UN Office for the Coordination for Humanitarian Affairs as Head of Office in Sumatra following the 2004 Tsunami, and as Chief of Staff for the UN Recovery Coordinator for Aceh in Indonesia. Prior deployments with the UN Refugee Agency include West Timor, Ukraine/Crimea, Albania/Kosovo, Central Asia and Iran. He started his career oversees with the Australian Embassy in Turkey following the 1990 Iraq war.

Learn more about Andrew, including the best piece of advice he has ever received, the first thing he does when returning home, and why his work is important here. 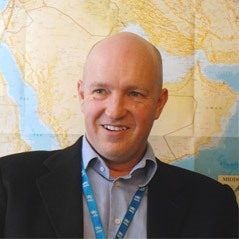