Yiying Lu is a veteran creative director specialized in cross-cultural innovation & branding. She speaks the language of tech and design as fluent as her Mandarin and English. She’s the founder and director of Yiying Lu Studio and a sought after international public speaker.

A graduate of UNSW and UTS, Yiying also did her exchange study at Central Saint Martins College of Arts and Design, University of The Arts London, before winding up in San Francisco where she’s spicing up the creative scene of the city with her innovative cross-cultural branding campaigns.

The multi-award winning artist and speaker show us some bursts of creativity.

Why did you move to California?

I was once told by the Seals and Sea lions at Pier 39 in San Francisco, that I need to move to California to spend time with them, get inspired and create the Great San Francisco Seal of Approval, which I did recently (see below)… 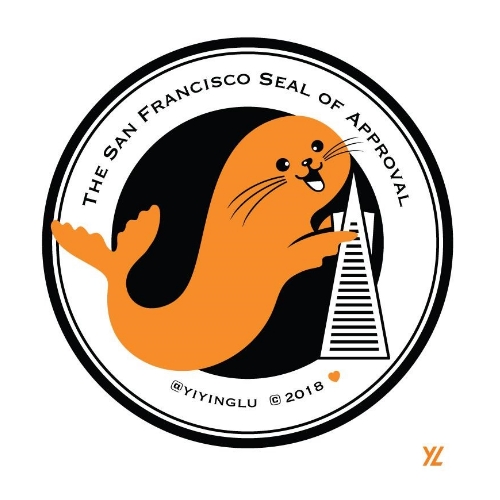 Joking aside, I do think it was a calling for me to move to California, specifically San Francisco. Over the last 10 years, more and more tech companies are moving into San Francisco, and more and more artist are being driven out of the city due to the high cost of living. I happened to be a hybrid who can understand and speak the language of both art and tech, and I felt this calling to move here to bridge the gap between art and tech, and bring back the equilibrium of these two seemingly opposite realms.

What’s your first impression? What surprised you most?

I visited San Francisco for the first time in February 2009. My first impression is: it feels like home. I was captivated by the optimism and energy in the tech startup community during its earlier days in San Francisco, from staying at my first Airbnb house to taking the first Lyft ride. The community here even threw a “Fail Party” to celebrate the global financial crisis, also in honor of the Twitter Fail Whale, an artwork I created and was used during Twitter’s early days.

Weather-wise: during my first visit the weather was nice and warm, which made me think it was a typical San Franciscan weather… Later, I was surprised to discover SF could actually get very windy and cold, depending on which neighborhood you live in, and which season you came. The summertime temperatures here can be freezing, so bring on the layers. What surprised me the most is that locals even gave the fog a name, it’s Karl the Fog, it also has a twitter account, which currently has 356K followers. And I made an art piece featuring him #KeepSanFranciscoWeird

Also, my first impression of the city was it is safe and beautiful, which was only partially true. This was because on my first visit to the city I was hosted by a lovely family from the inner Richmond district, which is a very family-orientated neighborhood. Later I stayed in different parts of the town and discovered that some parts of SF can get pretty rough: for example, I stayed in Lower Nob Hill for a few weeks during my later visit and walked pass the Tenderloin a lot. I was quite surprised to see the homeless situation in the city. Ten years since I first visited San Francisco, I learned different facets of the city. It is not perfect, yet I feel at home. Tony Bennett was right – “I Left My Heart in San Francisco”.

With a professional background in art and design, what drew you into public speaking?

I was always interested in storytelling. Art and design is one way of telling stories by visual lexicons: colors, shapes, iconography, typography, etc. Public speaking is another form to tell stories by using words, sounds, expression, body movements, and so on. I love using different methods to tell stories. I was drawn to public speaking as I love the real-time emotional feedback from live audience response, whether it’s through laughs or sighs. We feed each other’s energy and this experience fascinates me.

What was the most memorable stage experience? 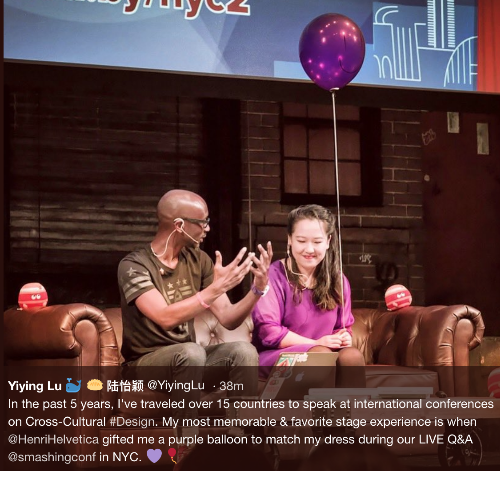 What’s the biggest challenge in your creative process? 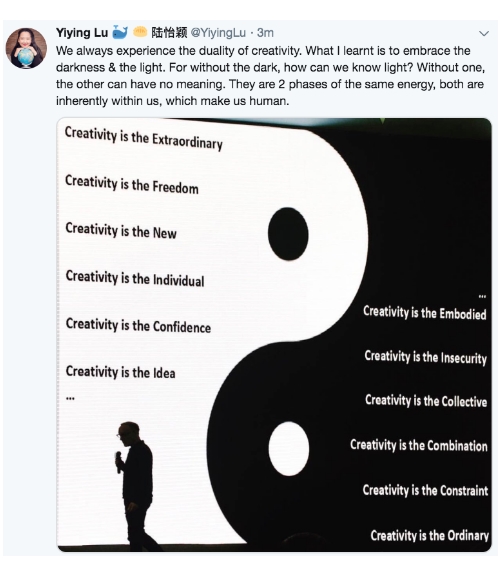 I think for anyone during their creative process, the biggest challenge, besides getting inspiration, is facing fear and self-doubts. Because no matter how much experience you have, however many projects you’ve accomplished, however many awards you’ve won, you will always experience constraints, challenges, and insecurities, which create fear and self-doubts: a fear that you may fail, a fear that your ideas won’t be as good as last time, a fear that people might not like your work, a fear that you might not like your own work. The thing is: it is okay! I believe creativity is a never-ending dance of duality between two states of mind: Love and Fear.

But then, recently I read this article that science proves love and fear are two sides of the same thing! This reminded me Cherokee story about how there are two wolves inside everyone: the one you feed, and the one you starve? Well, you need to keep both your wolves fed, so there’s no battle inside you. While you think fear is those hungry ghosts, I say view them with loving eyes – perhaps, as a matter of fact, they are just a hungry, hungry hippo. But no matter how big the challenge will be, I always try to be optimistic. Helen Keller once said: Optimism is the faith that leads to achievement. Nothing can be done without hope and confidence.

What do you to when you’re feeling stuck?

Take a nap. Go for a walk. Or simply do nothing and meditate. Everything has a season. Sometimes it’s your spring, and your creativity flourishes, but sometimes in your life it’s winter, and no matter how much you try to get things done, it’s time to hibernate. And that’s OK. Give yourself permission to hibernate, because what you call “creative blockage,” I see as an opportunity to rejuvenate.

When I am feeling stuck, I’d take a trip to San Francisco’s Chinatown, or have a big bowl of Pho, or pay attention to the patterns from the skin of honeydew melon, or take a photo of the bright yellow F line streetcar… When you are paying attention and appreciating the wonder of the seemly “ordinary” life, you will discover the extra-ordinary truth of being. When you allow yourself to just be curious and have fun, it leads you to obtain strong positive feelings, you are shifting from a low state of vibration (feeling stuck) in a state of high vibration (feeling liberated). By then, the stream of good ideas will naturally flow through to you.

What are your recommendations to eat like a local in San Francisco?

Lots of people have asked me about that. I decided to create a Yelp collection for my favorite places in San Francisco. http://www.yiyinglu.com/yelp