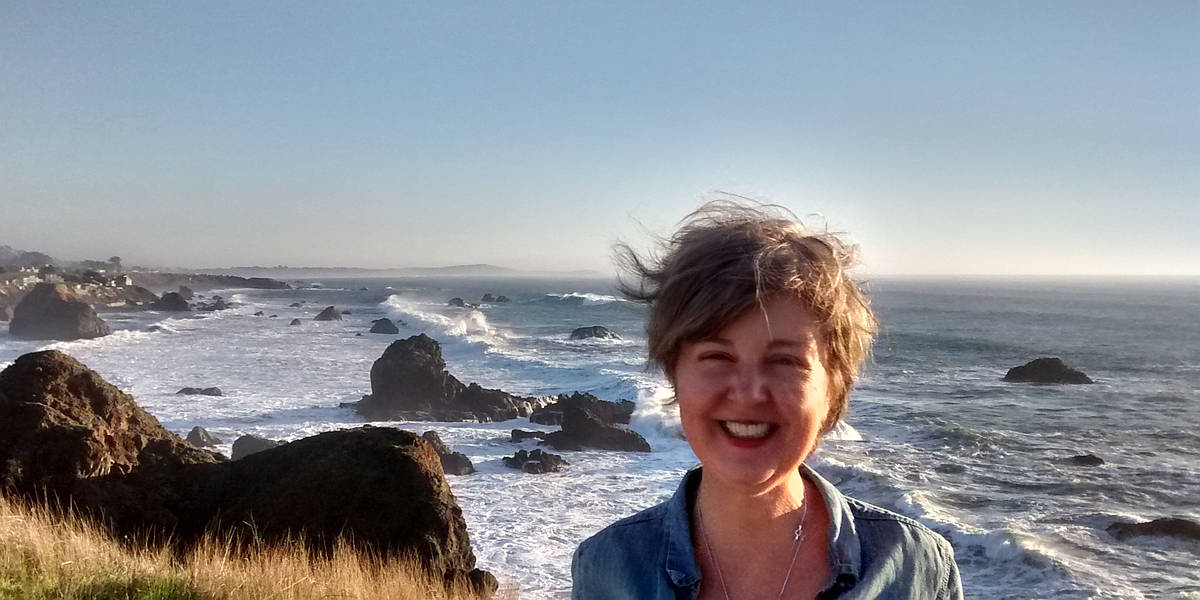 Jane Sloane is an Australian living and working in San Francisco. One of the many ordinary Aussies doing extraordinary things in her adopted home city. She’s working to advance women’s rights and gender equality in Asia and the Pacific, encouraging and empowering girls and women to realize their rights and potential. Jane is Director, Women’s Empowerment and Gender Equality at The Asia Foundation.

Jane’s passion for this work was imprinted from a young age. And later, it was Nelson Mandela who taught her that if she really wanted to make a difference she should focus on conflict resolution and citizen-led change. That’s what she’s done, spending time living in Asia and the Pacific including Fiji and other Pacific countries, working to increase women’s participation in politics. She held executive roles with Marie Stopes International, International Women’s Development Agency, Women’s World Banking and Global Fund for Women, before joining The Asia Foundation in 2016.

Having lived and worked in many countries, and as a frequent traveller to Asia and the Pacific, Jane now lives on a wooden boat in Sausalito, California and here she shares her unique story that affirms that, by changing one life, you can change many. She blogs at janeintheworld.com.

What made you move to San Francisco?

I was living in New York working as Vice President of Development with Women’s World Banking, and I was offered the role of Vice President of Programs with Global Fund for Women, based in San Francisco. I wanted to be leading work that supported women’s movements for change globally and this was the position. Also, Global Fund for Women is iconic. I’d grown up knowing its importance in getting funds to grass roots women’s organisations and movements.

How did you develop an interest in women’s empowerment and gender equality?

It seems like the interest was wired in me from birth. I heard voices of crones when I was walking to school and started advocating for my rights as a girl at a very young age and never stopped. Workwise it became a process of asking, ‘What about the women?’, ‘Where are the women?’, ‘Let’s ask the women.’ It led me to working directly with women’s organisations in Asia and the Pacific to learn from local women leaders about the issues that were most impacting their families and communities and what they felt was needed to break free of –in particular, poverty, violence and inequality.

Having worked in various cities, what’s your favourite place to live and work? Why?

San Francisco. I love the culture, the climate, the connectedness, the arts and creativity. Most of all, I love living in Marin County with its access to old-growth redwood forests, stunning coastline – and the bohemian vibe of Sausalito where I live on a small wooden boat. Sausalito has such an activist history. It’s where the houseboat wars occurred: where people living on boats fought the establishment for the right to live on boats and won! It’s where Stevie Nicks and Fleetwood Mac, Prince, Stevie Wonder and countless other groups in the 60s and 70s recorded at the legendary Record Plant. It’s where Jerry Garcia from the Grateful Dead got married – at the tiny Episcopal Church at the top of the hill. It’s where writer and philosopher Alan Watts lived as part of the counterculture.

You’ve worked in various organisations advocating the benefits and welfare of women globally, What’s the biggest lesson you’ve learnt on your way?

Two big lessons. Getting money to grass roots women’s groups and organisations and ensuring they have a seat at policy tables and access to key influencing forums is one of the most powerful ways to drive change. And, we must involve men to achieve the level of societal change needed. That’s why one of the projects we’re supporting in India is a Gender Lab for Boys in India to affirm positive male role models and behaviors to address toxic masculinities.

What’s the best experience you have had doing your job?

In Uganda I traveled from the capital, Kampala, some six hours by road –mainly dirt track toward the end –to meet a community where girls had been regularly kidnapped on the way to school, where rape, violence and child marriage had been intrinsic to the community’s psyche and, as one man said, “sex was like having a cup of tea.” One day a woman in the village decided that she’d had enough, and she began a one-woman campaign to talk to the male elders, leaders and heads of institutions stop the violence and the kidnappings, even though her husband would beat her every night when she returned home. A male teacher soon joined this woman because, as he said, he was haunted by his sister being kidnapped on the way to school and of the perpetual violence his mother suffered from his father. The woman applied to Global Fund for Women for funds to support their work and started expanding the outreach.  I was visiting the village some six years later where the violence, kidnappings and child marriage had stopped and where there were male and female mentors and advocates for conflict resolution and family and community enterprises to attract income and support. The village chief was now a woman, also called Jane, and we engaged in a deep conversation, with each other and with the villagers, about the transformation that had occurred. At the end of our time together I reflected to them the healing I witnessed and the sense of optimism and hope for the time ahead. It spoke to the power of getting funds into the hands of women in local communities and what it made possible in terms of an entire community transformed from violence and poverty to growing peace and prosperity.  “Thank you for being a mother in the world”, Jane said to me. It was a gift and invitation to reimagine mothering and creating because I don’t have children. It was also an immersion in wisdom and profound transformation, and it showed me what’s possible in our work.

What’s one of the biggest challenges facing women in Asia? How can the community help?

Violence against women and women’s ability to be able to occupy public spaces to feel safe is a huge issue in many Asian countries. At The Asia Foundation we’ve been supporting a social enterprise in India called SafetiPin created by a woman, Kalpana Viswanath, and her husband, Ashish Basu. Women can download the app and click on the visual icons that depict the domains of safety such as presence of street lighting, footpaths, and other women on the streets. Coupled with this, SafetiPin teamed with a ride-sharing company to place tiny cameras on vehicles to continually capture Delhi dark spots at night to determine where there needed to be better lighting for women to feel safe. The data from both the perceptions of safety and the camera capture are sent continually to a data capture unit.

We then worked with SafetiPin to present a Safety Audit to the government of India and the government responded by providing its own report on where it had installed extra street lighting, pavements, café licenses etc. The government also asked for a second Safety Audit. Since then different communities and countries and individuals have adapted the app for their own purposes. This includes women using the app to determine safe neighborhoods to rent or buy homes based on the safety ratings from the SafetiPin app. As Kalpana and Ashish have said, imagine what a gamechanger it will be for local governments when women, with rising economic and organising power, rate and invest in a neighborhood’s real estate and value based on how safe they feel living there. So, we need to invest more in women who are using technology to address systemic issues that affect their human rights, wellbeing, safety and equality if we’re to see the level of change required in these countries.

What are you currently working on?

Many programs to support women’s economic opportunities, political voice, security and rights through our 18 countries across Asia. One of the projects I’m leading is a Women’s Climate Resilience project. This involves working with governments in Asia to ensure gender inclusive approaches to policies to address climate change and disaster risk management and demonstrating the potential for green jobs for women. With many countries committing to shifting from plastic-based to plant-based materials, we want to ensure women play a central role in these new supply chains. We’re also looking at models for Green STEM to ensure young women studying STEM have access to mentors and experiences that can encourage them to learn about green design, green construction, green waste management, and gender inclusive approaches to artificial intelligence and coding.

Intrinsic in this work is ensuring women’s leadership in response to climate-related natural disasters. Something that many people don’t know is that during the Bangladesh cyclone in 1991, where over 190,000 people died, more than 90% of those were women and girls and one of the reasons for that were that the early warning systems were all male-to-male. So, we’re supporting women to create inclusive early warning systems in Bangladesh through use of technology and local networks as well as supporting women to read flood warning reports and input to local flood management plans.

One of the other projects I’m working on as a result of being a Senior Atlantic Fellow at London School of Economics is the creation of a feminist film academy in Asia and the Pacific to support feminist filmmakers to address inequalities in front of, and behind the camera. Asia is now producing half the world’s film and yet this filmmaking is profoundly unequal. From surveys of children and young people in Asia, we know that the age of 9 and 10 is a tipping point in terms of boy’s attitudes toward women and to support girls’ sense of their own power. We know too that film is a powerful and accessible medium to influence the ideas and attitudes of a new generation in Asia and the Pacific.

What are your ‘must-hit’ places to eat in San Francisco?

Outside of my regular travel to Asia, most of my evenings and weekends are spent in Sausalito, just a 30-minute (very pretty) ferry ride from San Francisco. So, in terms of must-eat places in Sausalito: Bar Bocce for the cool vibe (just in front of my boat community); Sartaj which is the hang out place for locals who love Indian food cooked by one of the most loved families in the neighborhood; a few doors away is Arawan, a favorite Thai restaurant. Then there’s Drivers’ Market, an organic market and café that walks its talk on sustainability. Fish is legendary as the place to dine for seafood, Sushi Ran is the go-to place for sublime Japanese fare and Scoma’s of Sausalito is the place to go for a meal with a view of the harbor.

My family and closest friends.

The patch of earth I know so well in Piccadilly in the Adelaide Hills, and the sand-dunes and beaches in Adelaide to which I return every time I go home. I’m a water baby and I’m happiest swimming in the sea.

A way of seeing land and country through time spent with Aboriginal and Torres Strait Islander friends.

Driving across the Kimberley in land that feels like spirit country.

Irony, which seems in short supply in the US.