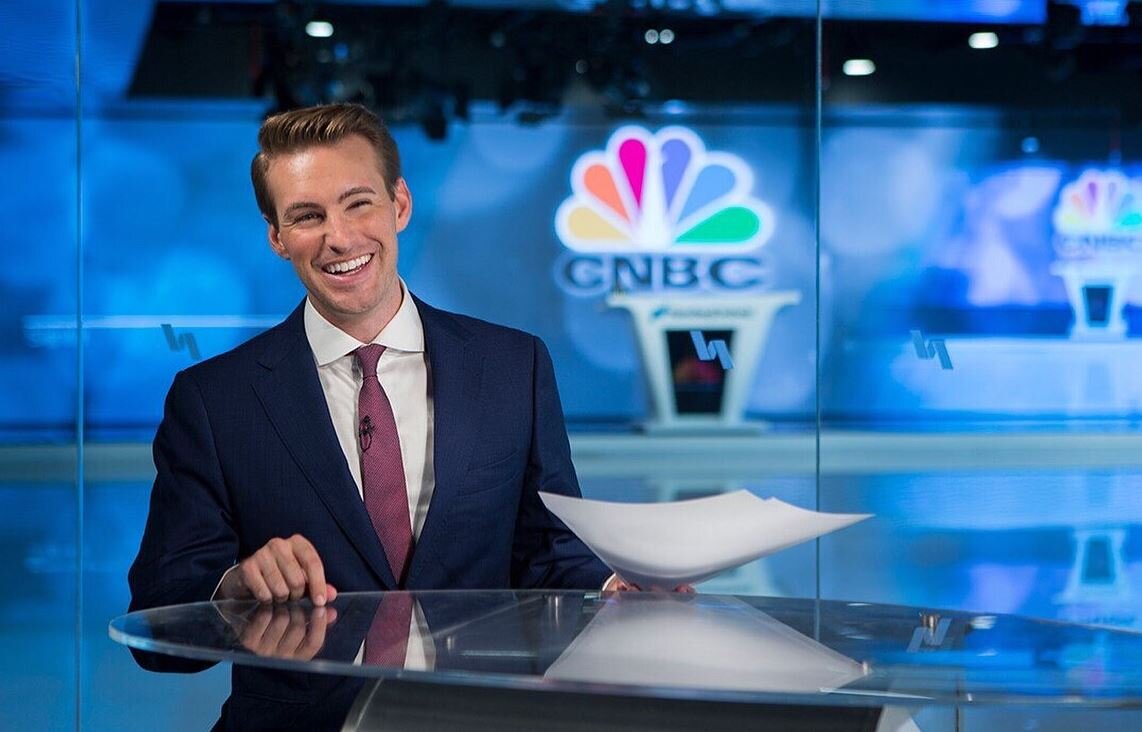 Dan Murphy connects the dots in the fast paced world of business and financial news. As Middle East Correspondent for CNBC, he can be found on TV, online, or often in an airport – following breaking news and big market moves in the region for the CNBC audience around the globe.

Dan started his career in his home state of Western Australia. He swapped Australia for Asia in 2015 to take up a role as a CNBC Anchor and Correspondent in Singapore, and in 2018, he took on a new challenge to help launch a bureau for the network in Dubai.

Speaking to Advance, Dan opens up about a family story of survival that inspired his first entry into the industry, the ultra-competitive world of news, and his work in the most geopolitically complex region on earth.

What made you move to UAE?

After three years at CNBC in Singapore, I jumped at the opportunity to be part of the team that was launching a new bureau for the network here in the UAE. It’s an entirely new part of the world for me, and the chance to meet the people and report on the events shaping the future of the Middle East was too good to pass up.

In these Emirates, forward is the only way the wind blows! In a single generation, thriving cities have risen from nothing but barren desert sands. It’s a country driven by unapologetic big thinkers, eager to make history while still honoring long held traditions. The Emiratis have built a successful safe-haven within the most fascinating and geopolitically complex region on earth. Moving here to tell that story made perfect sense at this stage of my career.

Having worked and lived in Singapore for three years before relocating to UAE, how did your Singapore stint prepare you for another international adventure?

I was born in Western Australia but there is something about the Little Red Dot that makes me feel right at home. On the ground, you really get the sense that Singapore is a country for everyone, where friends become family and work becomes play. It’s fun, full of opportunity and provides the ultimate gateway to the wonders of Asia.

Living and working in Singapore was an incredible personal and professional experience, and it gave me unparalleled insight into the rising economies and societies that are embracing the 21st century with gusto.

What’s your typical workday look like? What are your working hours?

In the news business, no two days are the same! Whether I’m reporting in the field or anchoring in our studios in Dubai or Abu Dhabi, I think every day brings a new challenge.

My typical workday starts at 5:30AM. I usually wake up to overnight alerts and briefing emails from our teams and contributors around the world. I consume as much news as I can before I get into the office, starting with the big headlines from the close of trade on Wall Street and a look at how various asset markets are moving in Asia.

My first port of call is CNBC, because I’m confident our team has it all covered. I also check on The WSJ, The FT, The NYT, Reuters, CNN and Axios to name a few – before checking the local news sites and heading over to Twitter for the rest.

This year, I’ve been lucky enough to wake up in Saudi Arabia, Azerbaijan, Egypt and even Austria for different stories, interviews and shows. Life on the lens is anything but routine.

How are AI and automation impacting journalism? What media industry can learn and benefit from technology innovation?

My job is to bring transparency and accountability to business. The consumers of my content rely on me and CNBC to be informed and educated, which in turn helps them make smart investment decisions to ultimately make money and get ahead. Technology has always played a key role in this crucial transfer of knowledge.

AI and automation have the power to truly enhance this process, but only if it flourishes in a way that protects the fundamental principles of quality journalism – values like truth, independence, accuracy, fairness and impartiality. Standards are absolutely critical in this new digital age.

The world of media is changing at a rapid pace. As the forces of disruption impact traditional business models across the sector and all newsrooms continue to adapt, we should welcome change – but never forget why journalism exists in the first place.

What are the most important traits of a professional journalist?

A good journalist should recognise their responsibility to the audience they serve. The first and biggest responsibility as a journalist is to “get it right.” One must always strive for accuracy, because journalism fails with falsehoods. Having a natural curiosity, a love of reading, a quest to learn, and the ability to listen with a healthy dose of skepticism are just some of the traits that also come to mind.

What are the most memorable reporting experiences you have?

I’ll never forget covering the disappearance of Malaysia Airlines flight MH370 in March 2014. The interest around the world in the story of the missing plane and its 239 souls on board was unlike anything I have ever seen before.

As the news broke, the media of the world descended into Western Australia to cover the grueling search. My colleagues and I were stationed at a military airbase where an international coalition of aircraft was being deployed in haste to find the plane. We broadcast from sunrise to midnight for weeks, overcoming intense technical and logistical challenges to relay information from authorities to a global audience desperate for answers.

The loss of MH370 was a truly international story with major business, financial and geopolitical ramifications – but all of this is insignificant in comparison to the real human impact of the disaster. My heart still breaks for the families who lost their loved ones on that day, and for many, time hasn’t healed the rawness of the tragedy.

Ultimately, it’s the people you meet that make life as a journalist so rewarding. I think CNBC as a platform is a one of a kind bridge to the region’s most consequential business leaders and policymakers, some of whom are playing a pivotal role in the events that move the Arab world and beyond. In the past few months alone, I have interviewed the Energy Ministers of Russia, Egypt and the UAE. I’ve also interviewed the Chairman of Emirates, the Chief Executive of BP, the Deputy Prime Minister of Italy and the UK Secretary of State for International Trade. You just never know who you might meet next.

What are the biggest challenges working as a reporter and presenter?

I feel an overwhelming responsibility to get my reporting and analysis right. I strive for accuracy every day, because accuracy is what matters most.

How did you decide to pursue a career in journalism? Was there a pivotal moment?
I can pinpoint the exact day! It was April 13th, 2007 – a Friday that will forever be etched into my mind. On this day, my 13-year-old sister, Ella, was severely injured after being mauled by a sealion in a freak attack while tow-surfing off the coast of our hometown.

The sealion leapt from the ocean and went for Ella’s throat. Its sharp teeth pieced her neck near her carotid artery, breaking her jaw and knocking out her teeth. Before she lost consciousness, she was saved from the water by her girlfriends on board the boat and a quick thinking family friend, who managed to expertly maneuver the vessel between Ella and the animal before it could strike again.

It was a miraculous escape for my sister. Her story of survival captured the attention of local and international media, and eventually lead to the creation of a National Geographic documentary called “After The Attack” – a story of her recovery and tenacious determination to get back into the surf.

Watching how the media told Ella’s story was inspiring. I learned quickly that visual storytelling is an art form and a craft that requires years of practice and skill to perfect. If you get it right, it can have a profound impact on people and bring about great change.

Her story put me on a pathway to news and I’ve never looked back. You’ll be pleased to know that Ella made a complete and full recovery. She’s not scared of sealions, and she’s still surfing better than me to this day.

If you weren’t a journalist, what would you be doing?

I would be flying planes. There is something about aviation that captures a mood!

What’s your favorite thing about Dubai?

There are many things to love about Dubai and Abu Dhabi. I think the single best thing about these twin cities is the opportunity they can offer for people who are willing to take a chance on themselves, and answer the door when opportunity knocks.